I wrote this narration for one of our YouTube videos recently, in which I explored why it is that I think an old-fashioned, cast-iron cooking stove can have such a positive impact on shaping family life and culture, and why so many people end up developing such a strong connection to their Homewood. I have reproduced the text here, below the video, for anyone that would like to read it in essay form – Zak, April 2021

The kitchen stove is a place of warmth and sustenance; provider of hot showers, comforting baths and shared meals; a gathering point around which family and friends catch up and share their day; an escape from the cold; a welcome refuge from the stresses, demands and insanities of modern life; the natural spot to sit alone and watch the flames in quiet contemplation, or with favourite book or latest craft project, while the kettle bubbles merrily away and the smells of baking fresh-out-of-the-oven fill the room.

We have had many customers tell us that their Homewood has become “the heart of the home”, and I believe that these few words cut right to the very core of what our company – and this channel – is all about. This video is going to elaborate on this simple phrase, and hopefully give you a feel for the quiet yet profound power that a cookstove has to transform home and family life for the better.

As a woodstove becomes central to home life, it – like a heart – brings along a certain rhythm. A daily rhythm, but also a seasonal, and a yearly rhythm. One of deliberateness and at a different pace, with appreciation and consideration for the cycles of nature. The morning ritual during winter, of opening controls up and stoking embers back into life, of building a good, clean fire, of baking, of having banked up a glowing bed and putting on a large log to see you through the night just before heading off to bed in the evening. The regular felling of firewood in the spring and summertime, splitting and piling it up to season and be ready for the winters of future years to come. Of replanting, managing a sustainable block of trees in staggered stages of maturity for continual source of firewood, a cycle of renewal and regeneration that grants independence and control over your own energy supply. Even the mundane repetition of carrying in armfuls of wood, or adding ash to the garden compost, become familiar routines, comforting in their own way.

Simply sitting in front of the fire has the power to send you back to a less-complicated time. There is something almost magical about the ability of the flames to hold our attention and ground us in the here and now. As the warmth and cosiness washes over you, the artificial urgency of your smartphone’s notification light fades into the unimportant background.

Many of us lack for meaningful ritual in our lives, but the act of lighting a fire, nurturing it into life from spark to flame, up to established glow and quietly combusting log, and then using this fire to cook food is a ritual that predates even agriculture and is one in which we can all participate. It is a process that our ancestors took part in and it remains just as fulfilling for us as it was for them – there is something instinctive within us that is drawn to, and recognises the activity as one that promises reward and deserves attention. This deep relationship with fire was forged across millennia and has been absolutely central to the human experience, yet almost all of us today who live within the technological society are completely cut-off from this connection in our daily lives, abstracted now as fire is in the form of electricity able to be commanded without thought or effort by the push of a button. Running in parallel to this, the supermarket shelf has separated us from the reality of our food and severed that once-vital connection we enjoyed with the soil and seasons. Some people mourn for these losses, and long for a life that does not revolve around “FASTER!”, “NEWER!” or “MORE!”, and as each novel experience brought about by some new technology is even more quickly overshadowed by the next, the less we are dazzled or contented in it. Freed as we now are from the responsibilities of food and fire, told to “find ourselves” in a world where we could be anything, many instead feel adrift, directionless in an ocean of endless distractions. We yearn for something real again.

In this plastic age of short-lived consumer products, pre-packaged single-serve meals, and the diminishing returns of never-ending novelty, something as unapologetically “backward” as a stove that your great-grandmother might have cooked on comes to represent a refreshing rejection. A cast-iron constant; a reminder of what life once was, and what it could still be. A call to re-forge those old connections with land and neighbour, to slow down and appreciate what truly matters: a simple home-cooked meal, shared with those you love. An anchor, of sorts.

A cast-iron stove can be like a window to an idealised past: a time that may or may not have ever even truly existed, but to which many of us still feel the pull all the same – of small villages, humble cottages and meaningful connection with local community (and yes, the irony is not lost on me here, as I share this on a social media giant, for strangers I am unlikely to ever meet); when it felt like what we did mattered, when people were more than just interchangeable units valued only for their economic utility, cogs to be slotted into faceless corporations or impersonal bureaucracies; a pastoral time of eating wholesome food, grown and raised and harvested with one’s own dirt-caked hands alongside your neighbours – organic and seasonal by default. Of family, when children weren’t glued to screens nor thought of as a burden, but helped in the garden and with the animals and would run wild with their friends through the fields, fit and healthy. When the old folks were treasured and grandparents sat at the hearth and kept the home fires burning as they knitted and mended, and carved and whittled and split kindling and stirred the stew, and passed down family stories as they talked and read to the wee ones in their care. Keeping harmony with the cycles of seasons and weather and the rhythm of the sun – an existence in which people don’t view themselves separate or antagonistic to nature, but as an integral and important part of nature.

For many, their stove is like an old friend, affectionate nickname and all. As things seem to become ever more disposable, disjointed and digital, and our lives can feel increasingly divorced from reality: something solid and real, comforting by its very presence.

Children, as they grow playing at the hearth, being fed and warmed by the stove, become capable and responsible for splitting kindling and gathering wood to feed it. They learn to cook actual food grown from their own gardens, and this relationship with the family stove becomes inexorably connected to their concept of “home”. It’s there, day after day, season after season, year after year. To be lovingly-polished and cleaned, cared for and fed, as it continues to faithfully provide for the household, feeding and warming the home in return.

I think this difference is why we don’t really hear of people having formed a close connection with their microwave oven or their refrigerator. There is something deeply satisfying, powerful even, about eating food you’ve grown/raised/hunted yourself, cooked on a fire you’ve brought into life, burning wood you’ve grown, and felled and split and seasoned yourself, at a table surrounded by your family. There’s a harmony of consumption and production taking place, a balance of honest labour and reward. An experience primal and wholesome that resonates with and connects you to the same experiences of those who came before, in an incomparable way. Certainly not something that can be captured by eating a microwave-heated meal out of a disposable packet, in front of a glowing screen, alone.

You nurture and care for a fire, and it feeds and warms you and yours in return. The relationship extends both ways, in this harmony of complementary production and consumption, and is of a far different and more real nature than merely flicking a switch and expecting immediate compliance.

It asks more, and it gives more.

We’ve had customers shift houses, and tell us that it was only after their next Homewood was installed in their new house that it felt like a home again. Others have actually taken their stove with them after they have sold their house, so strong was the connection to their family’s Homewood.

This all might seem a rather strange or over the top way to talk about an inanimate object, and I confess that when I first left the city behind to return home and help my father in this business, I thought this kind of feedback was nice, but I didn’t really understand what it meant for him to hear how enthusiastically so many of his happy customers raved about his creation and how it had transformed their home. I don’t think I properly got it, not back then. But I have come to appreciate that it is so much more than just a “thing”.

It’s Zelda’s excitement at successfully baking her first cake without help. It’s us all singing along with Vera as she plays her ukulele. It’s Tilda quietly reading and Gretel pulling funny faces for William, and their shrieks of shared laughter. It’s all those dinners Janie kept warm for me when I was working late that I probably never thanked her properly for. It’s all those years of cloth nappies drying on the clothes rack; it’s the toddler, taking their first steps. It’s the voice of my father telling me to go fetch wood when I was boy. It’s being small again, and my siblings and I squabbling over who gets the bigger slice of the pie Mum has just taken out of the oven. It’s us brothers and sisters now adults and with families of our own who don’t really see as much of each other as we should. It’s my grandparents, no longer with us, but whose flame we carry forward into the future. It’s the promise of grandchildren to come, and great-grandchildren after them.

I hope that at least some of them will be raised in the warmth of a Homewood Stove, perhaps one that I, or even my father, might have built.

It’s the heart of the home. 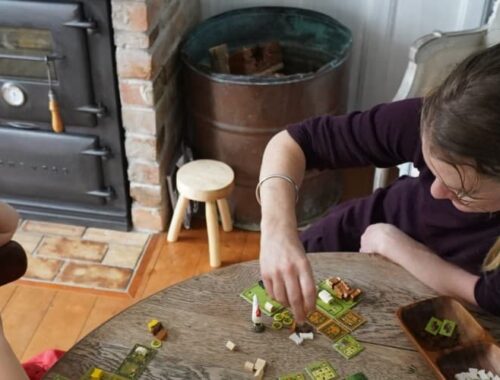 Why We Love Board Games